The Australian destroyer HMAS Stuart that distinguished herself in the evacuation of troops from Greece at Tolos was actually built as a destroyer leader in the Great War. The Stuart was one of the destroyers transferred to Australia by the British to replace older ships. While we don't have a photograph from 1941 in the Mediterranean, we still can get a feel for what the ship looked like. 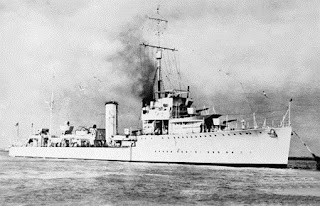 The Stuart was a larger ship than the V and W class destroyers also built in the Great War. She was better able to carry troops then the smaller ships. Her captain showed exceptional leadership in operating at Tolos under trying conditions and still managing to evacuate a significant number of soldiers from the beach. Sadly, the entire withdrawal from Greece was badly managed by the British staff, under the command of General Wilson, that it was only due to the initiative and energy shown by more junior officers and men that as many men were withdrawn as there were. The Royal Navy and RAN greatly distinguished themselves during April to June 1941 under very dangerous conditions.
Posted by Jim at 5:34 AM