The force that General Wilson commanded in Greece was called "W Group", W presumably standing for Wilson. By 25 April 1941, the evacuation plan had changed. Now, they would try to hold off the German advance while embarking from more southern beaches. They had hoped to have all troops withdrawn by 27 April, but it was not to happen. New rear guards were mounted to buy time for more troops to withdraw. Brigadier Charring, commander of the 1st Armoured Brigade, was to try and hold eastern Attica, to protect the Athens beaches from the north. They were then to move to Rafina for embarkation on the night of 26-27 April. They also hoped to withdraw some 8,000 troops from Kalamata the same night. Now, they hoped to withdraw the New Zealand troops from far southern beaches on the nights of 28/29 and 29/30 April. General Freyberg was designated as the commander in the Peloponnese. The plan was now to withdraw the 19th Brigade from Megara on the night of 25/26 April. Wilson's staff then doubted that all the men could be embarked at Megara, so they were to send half to the beaches at Marathon. It seemed that the situation was starting to be more than Wilson's staff could handle. This is based on the account in Vol.II of the Australian Official History.
Posted by Jim at 4:44 PM No comments:

An unplanned 7,000-8,000 men had gathered at Navplion, where the plan had only envisioned 5,000 men. The transport Ulster Prince was wrecked at Navplion, late in the day. The ship ran aground when entering the harbour at the entrance. Despite that mishap, some 6,500 were embarked on ships. That night, nothing happened at Tolos. During the same time, at the Piraeus, there was a disaster. The yacht Hellas had embarked civilians and sick and wounded. The ship was bombed by German aircraft at about 7pm and the ship burned and capsized, killing the passengers. Somewhere between 500 and 742 were killed. At the same time, Allen's group headed towards Argos from Megara, hoping to be embsrked from there. As they were heading out, they were stopped and asked to provide a battalion as a guard against attack by German tanks. General Freyberg was still in Greece, and he heard of the plans and told them that Corinth had been bombed and the road was impassible. The original plan had been to have everyone embarked by the night of 26-27 April, but that had all been changed. This is based on the account in Vol.II of the Australian Official History.
Posted by Jim at 5:50 PM No comments:

Withdrawal from Kalamata on 26 April 1941 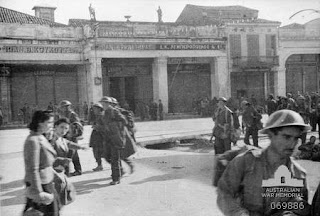 Tomorrow will be the 71st anniversary of the withdrawal of Australian troops from Kalamata in Greece. This picture shows Australian troops waiting for the embarkation at Kalamata. Some of the troops were from the 2/1st Field Regiment, which had fought well in the waning days of the Greek campaign. The withdrawal had started to go wrong about this time, as the next day, German troops had arrived in Athens. In a few days, by 30 April, some seven to eight thousand troops were captured in Kalamata by the Germans. By then, 43,311 troops had been evacuated, but the lack of coordinated command by the British had allowed the Germans to gain the upper hand and to overrun the defenders trying to hold them back to allow more to withdraw. The picture is from the Australian War Memorial. This is in part, based on the Official History and online sources.

The ships Calcutta and Glengyle at the Porto Rafti embarkation

The two ships that embarked troops from Porto Rafti in Greece were the cruiser Calcutta and the fast transport Glengyle. The Calcutta was near the end of her service life, while the Glengyle was a relatively new ship.

The British cruiser Calcutta was a World War I veteran that had been converted into an anti-aircraft cruiser in 1939. The Calcutta was one of the C-class cruisers that had been built with a "trawler bow" to improve sea keeping during North Sea operations. Prior to embarking troops from the beach at Porto Rafti, the Calcutta had been assigned convoying duties to provide some protection against air attack at a time when there was inadequate fighter strength in the Mediterranean Sea. The Calcutta became a victim of the increasing German air presence in the Mediterranean Sea and was sunk on 1 June 1941 by Ju-88 dive bombers at the end of the battle for the island of Crete. The picture is at least of one of the converted cruisers of the same class (Cairo, Carlisle, Calcutta). 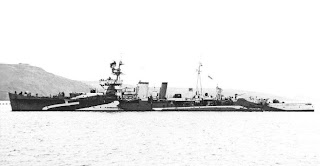 The Glengyle was one of a group of four fast cargo ships (18 knots) that quickly became favorites of Winston Churchill. The Glengyle was fitted to be able to carry early British landing craft and had been involved in a raid on Bardia a few days before the embarkation of Australian and New Zealand troops from Porto Rafti in Greece. 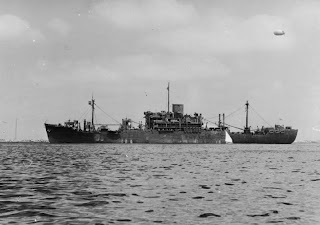 The plan for leaving Greece involved three large embarkations of "British" troops. The majority of the troops were actually from either Australia or New Zealand. The first group to leave were the 5th New Zealand Brigade Group, with other units. They were picked up from Porto Rafti. Major Sheppard, in charge of a team of Australian officers, directed the embarkation. Major Sheppard was the 6th Australian Division's legal officer. The troops were loaded by 2am, with about 5,000 men on the amphibious transport Glengyle and 700 men on the old cruiser Calcutta. The other evacuations ran into problems. The cause was partly because the groups of men were not in a large, organized unit. The Australians supervised the Tolos Bay embarkation while a British staff supervised at Navplion. Another issue at Navplion was that there were many more men than had been expected. This is based on the account in Vol.II of the Australian Official History.
Posted by Jim at 5:15 PM No comments:

A successful defence at Thermopylae

The April-May 1641 timeframe saw determined infantry backed by artillery able to defeat German tank tanks. One of these was at Tobruk on 11 April 1941. Another was the defence of Thermopylae. The third was again at Tobruk on 1 May. The Germans considered that 12 of the tanks knocked out at Thermopylae were total losses. Many more were disabled but were repaired. The Germans were already masters at recovering and repairing knocked out tanks. The British had yet to learn the skill. German records show the attack against the New Zealanders was made by 18 tanks, including four Pzkw IV's armed with short 75mm guns. The tanks were crewed by 70 men, of whom 7 were killed and 22 wounded. This is based on the account in Vol.II of the Australian Official History."

On 24 April 1941, the Australian battalions defending such places as Skamnos, Brallos, and Gravia were being hard pressed by the Germans and Brigadier Vasey, 19th Brigade commander, realized that they would have to withdraw. The 2/2nd Field Regiment preserved their guns, rather than destroy them, and had tried to save some rounds before they moved south. They left the battle at about 8:30pm on the 24th, heading down the road. The engineer company made a road for the guns to use in their withdrawal and then destroyed it after they passed. Fortunately, the pressure had eased, somewhat, on the rearguard. There remained one more rearguard at Erithrai, the King's 2/5th Battalion. This is based on the account in Vol.II of the Official History.
Posted by Jim at 5:07 PM No comments:

The Greek reception for the troops in Athens

When the troops arrived in Athens, the had the marks of a twelve hour battle and a 160 mile trip through the night. On 25 April 1941, a long column of trucks and carriers, filled with troops from Brigadier Barrowclough's 6th New Zealand Brigade. The people greeted them and threw them flowers. Men and girls climbed up on the running boards to shake their hands. The quote, which is representative of what the men heard, is "Come back--you must come back again--Good luck--Good luck".

Back in the hills, on the left, the 19th Australian Brigade had been under German attack. The guns had been attacked from the air on April 23rd. The guns were moved at night further to the rear, but left the previous emplacements looking as if they were still occupied. Sure enough, on 24 April, 65 Stukas hit the positions that they had vacated. The men could see German tanks on the move, wheeling to hit the New Zealanders. This is based on the account in Vol.II of the Australian Official history.

Brigadier Miles, a New Zealander and regular army officer, commanded the artillery defending the troops near Thermopylae. Firing up the road succeeded in stopping any tank attacks for the moment. There was a danger of being flanked, however. General Freyberg was on the spot commanding the troops. When it seemed that the ammunition trucks would not be available, he had Brigadier Miles carry troops on the artillery vehicles. The remainder would have to march. The battle continued, but by 9:15pm, the trucks had arrived to carry the troops. The artillery pieces were destroyed at that point. By midnight, the column was headed south and would pass through Athens. Brigadier Miles had been sent ahead, but General Wilson's staff had just left when he arrived. He had to find a route through Athens without any help. This is based on the account in Vol.II of the Australian Official History.
Posted by Jim at 4:39 PM No comments: