This is a deviation from our current thread, in honor of the men who invaded France on 6 June 1944. In 1997, I saw a History Channel documentary/dramatization of D-Day and the immediate days following. Lord Lovat was prominently featured in the movie. Simon Fraser, Lord Lovat, was a prominent commando leader in World War Two, at least up to the Normandy Invasion. There is a good picture of him with some of the men of the 4th Commando at Newhaven, after the Dieppe Raid in August 1942. 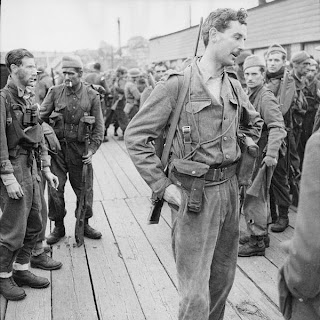 The commandos were a rough looking lot, but then what would you expect? Lord Lovat, of course, has the hero and natural leader look. At Dieppe, Lord Lovat was an acting Lieutenant-Colonel. The 4th Commando was to stage two landings about six miles west of Dieppe to neutralize a coastal artillery battery. The 4th Commando included fifty American Rangers, men of approximately the same caliber as the British commandos. Foreshadowing the Rangers at Normandy, the 4th Commando scaled the cliffs and destroyed the battery of six 15cm guns. Their success was the only good thing that happened in the Dieppe Raid. This is based on Wikipedia information which we believe to be largely correct.
Posted by Jim at 6:03 PM